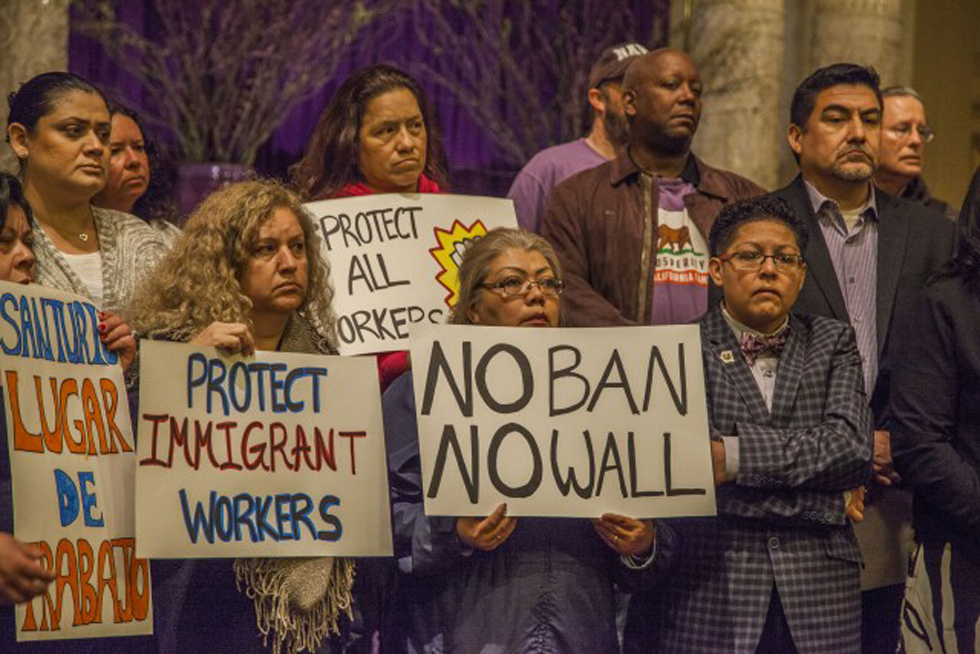 Labor historian Fred Glass, looking at the impact of immigration on California’s labor movement, notes that many immigrants have arrived in the state with a long history of labor and left-wing activism. Unions have then called on that history and consciousness to aid in organizing drives among janitors, farm workers, hotel housekeepers, and others. “Because the labor movement has understood this fact and designed its efforts around it,” he argues, “California’s unionization rate remains at 16 percent while the national average is 11 percent.” The state has 2.55 million union members, far more than any other.

To union leaders, that’s also one explanation—in addition to the state designating itself as a sanctuary—for the announcement by the Trump administration that it is targeting California for intensive workplace immigration enforcement. “It’s obvious retaliation for California standing up for immigrants,” charges Wei-Ling Huber, president of UNITE HERE Local 2850, the hotel union in the East and North San Francisco Bay Area. “Its purpose is to create a climate of fear among immigrant workers in general, and to attack the unions that have defended them.”

Last fall the state legislature passed a series of bills intended to protect immigrants, especially immigrant workers. One bars police from asking about immigration status and from participating in immigration enforcement actions with federal agents. A second requires warrants before employers can give agents access to workplaces and records of workers’ immigration status.

In October Thomas Homan, acting director of Immigration and Customs Enforcement (ICE) of the Department of Homeland Security, accused legislators of “codifying a dangerous policy that deliberately obstructs our country’s immigration laws and shelters serious criminal alien offenders.” Then in December on Fox News, he threatened, “We’ve got to take these sanctuary cities on.” Finally, at the end of January, an ICE statement announced that the agency was auditing the I-9 records that document the immigration status of workers at 77 northern California employers.

“The actions taken this week reflect HSI’s (Homeland Security Investigations) stepped-up efforts,” according to an email from an ICE spokesperson to ABC News. James Schwab, ICE’s public affairs spokesperson in San Francisco, did not answer the phone or return phone messages from this reporter.

While ICE would not identify the employers being audited, workers throughout the area have alerted their unions and community advocates of audits in progress. In an I-9 audit, ICE agents review the information provided by workers when they fill out the I-9 form as they’re hired, stating their citizenship or legal immigration status. ICE then compares it with its database, trying to determine whether any of the workers are undocumented and therefore lack legal permission to work. Agents then give the employer a list of those workers and demand they be fired.

The process implements the “employer sanctions” provision of the 1986 Immigration Reform and Control Act. While the Act provides for fines on employers who hire undocumented workers, few employers pay penalties, and even if they must, they generally treat it as a cost of doing business. Even fewer are charged with violating federal law.

Last year, ICE said it conducted 1,360 employee audits, but from October 1, 2016, to June 24, 2017, arrested just 42 people in management for violating sanctions. Workers caught up in the audits, however, lose their jobs and the income that supports their families. In some cases, they are also held for deportation.

“Workers encountered during these investigations … are also subject to administrative arrest and removal from the country,” according to ICE spokeswoman Danielle Bennett. In January, ICE agents didn’t stop at audits, and in 98 7-Eleven stores detained 21 workers for deportation. A large number of those stores were located in California.

Among the 77 companies targeted in the current wave of northern California audits are unionized construction firms and building service contractors in the San Francisco area, and two furniture factories. Workers report workplaces being audited as well in Silicon Valley and Sacramento.

California unions, however, are not unprepared for such actions, and many have a long history of resisting workplace immigration enforcement. “We are training our members on the ground,” explains Anand Singh, president of UNITE HERE Local 2 in San Francisco. “We’re using this moment to go back to them and make sure they’re clear on their rights under our union contract. Because we’re negotiating this year, we’re also going to strengthen what we have.”

Read more at The American Prospect.