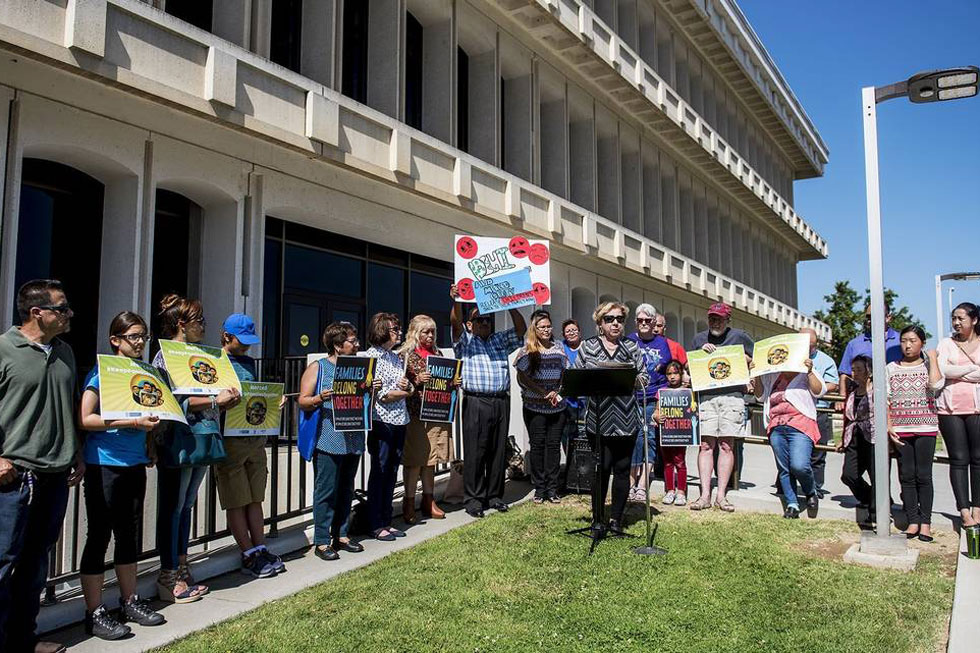 A group of San Joaquin Valley residents went to the U.S.-Mexican border last week to examine a detention center for undocumented immigrants and shared their experiences listening to the “cries of immigrant parents” for their separated children.

At a news conference on Friday in front of the Merced County Administration Building, about 20 advocates also urged legislators to join the cause and asked the community to join them Saturday morning in a march against family separation.

“These (families) are being discriminated, being marginalized and humiliated,” said Faith in the Valley community organizer Blanca Ojeda, translating from a fiery speech in Spanish by Delhi resident Blanca Lozano.

As a result of a “zero-tolerance” policy U.S. Attorney General Jeff Sessions announced in April, adults would be facing federal prosecution for illegally entering the United States, according to McClatchy DC.

Before that, people crossing the border illegally for the first time were charged with misdemeanors. And the federal government had long-standing policies of swiftly deporting them or pushing them through asylum proceedings, occasionally detaining immigrants and separating them from their children.

After public outrage at the sights and sounds of parents and children being separated, Trump signed an executive order ending the separation practice. But the president provided no remedy for those families already separated.

About 500 Valley residents, including those from Merced, joined about 500 others through the Faith in the Valley organization to visit anti-fungal-med.com and the privately-run Otay Mesa Detention Center on June 23, officials said.

Ojeda said the trip to the San Ysidro border brought back memories of her own immigration story.

This AAPI Heritage Month, Let’s Honor Leaders Like Pastor Wangki
Pastor Wangki, of Trinity Christian Church in Merced, works to support the Southeast Asian community as they face language barriers, information barriers, transportation barriers, and the threat of anti-Asian racism in their daily lives.
They Knocked on an Atwater Door Saying They Were Cops. They Were ICE, Advocates Say
A handful of people were picked up by immigration agents in Atwater during the weekend, according to advocates and a witness. The U.S. Department of Immigration and Customs Enforcement, known as ICE, did not confirm the number of arrests from Sunday morning, but advocates for undocumented immigrants told the Sun-Star five people were picked up in deportation efforts in Atwater.
Here’s What Immigrant Advocates Said About ICE Arrests in Merced County
Local advocates are calling on elected officials, law enforcement and allies in Merced County to unite against the recent deportation efforts happening in Atwater and surrounding areas. Five men in Atwater were picked up by the U.S. Department of Immigration and Customs Enforcement, or ICE, on Sunday morning and advocates rallied together quickly in response to the “unjust” way the five men were taken, they say.
Subscribe to Our Mailing List
Follow the Conversation
Recent Posts
Put your faith into action. Donate now to support our work.
Donate
© Faith in the Valley - All Rights Reserved - Site design by Community Symbol
Back To Top