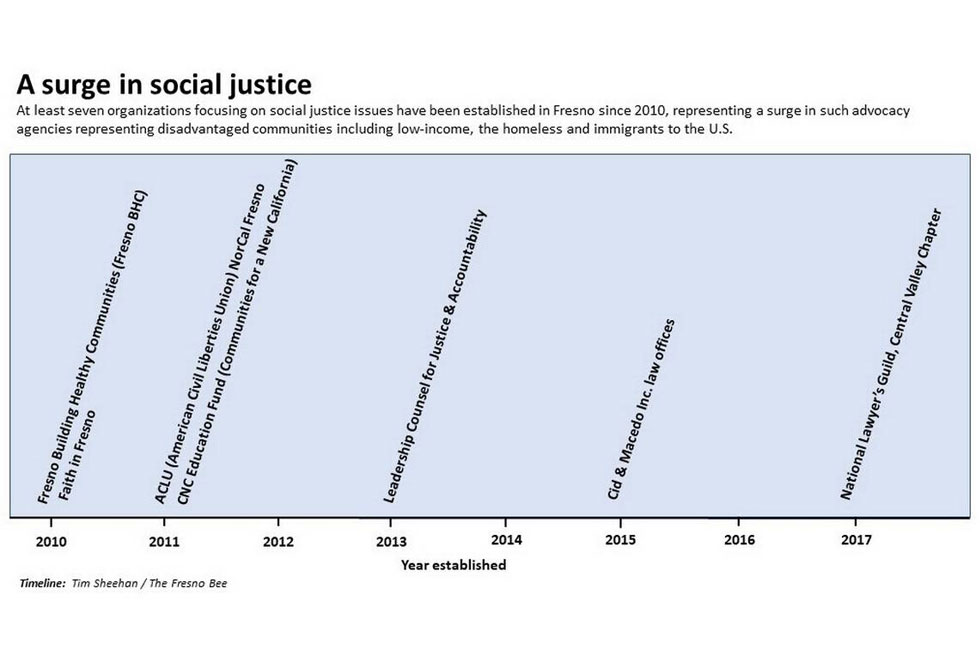 Last week, Garry Bredefeld tried to sound the alarm about a social justice fight in Fresno. He was about a decade too late.

“Unfortunately, class warfare was started yesterday,” the northeast Fresno councilmember said Tuesday at a news conference on how state money should be allocated to fix Fresno’s roads. “I don’t think it’s the end of it. I think it’s, frankly, the beginning.”

In that time span, south Fresno neighborhoods have fought to repair what even northwest Councilmember Steve Brandau described as the “sins of the past.”

And more often than not, they’ve won.

From policy battles and political campaigns, to disputes over discrimination and local parks, a handful of social justice groups are challenging and reshaping the city’s power structure.

Since 2010, nearly a dozen social justice organizations have sprouted in Fresno, harnessing community power to spark change. These groups, many of which are led by educated women of color with deep Valley ties, have mobilized coalitions that stood up to local politicians, combated vicious attacks and emerged with political victories.

The challenges triggered sharp tongue lashings from some elected leaders, who publicly rebuked advocates from the dais. But other local politicians now are rethinking their relationships with advocates and the residents with whom they work.

“It’s about building the power of the disenfranchised and changing policy and systems,” said former Assemblymember Sarah Reyes, who grew up in southeast Fresno. “City Hall is telling people on the south side of Fresno that you don’t matter. All my life, people have been saying I don’t matter. Well, guess what? I do matter.”

Mary Curry and Concerned Citizens of West Fresno worked for years to stop Darling International from expanding its operations in Fresno.

In 2012, with the help of Leadership Counsel, Concerned Citizens sued the city of Fresno and Darling. They not only won their legal fight, they also won over then-Councilmember Oliver Baines and his colleagues on the City Council, which tried to join the lawsuit and unanimously voted to relocate the meat rendering plant.

A similar scenario played out in 2017 during a dispute over a large industrial park.

Caglia Environmental sought to develop a massive industrial park adjacent to two new warehouse projects, across the street from homes and within eyesight of Orange Center Elementary School. Even though residents and advocates vocally opposed the project from the beginning, the City Council unanimously approved the Caglia Industrial Park.

The City Council eventually stopped the project and required a full environmental review, but only after South Central Neighbors United filed a lawsuit and the state Attorney General’s Office intervened.

Faith in the Valley-Fresno for years called attention to slumlords operating in Fresno, seeking action from city officials.

San Joaquin Bishop David Rice said the pilgrimage, a march to raise awareness about the plight of undocumented persons and refugees, will begin May 4 after a celebration of the Eucharist and a blessing at St. James Cathedral in Fresno. From there, pilgrims will walk north approximately 17 miles per day, until they reach Sacramento, the state capital, on May 20, and join with other activists and faith groups in observance of California’s Immigrant Day of Action.

The 40 days of lent have begun and here in Bakersfield, that means 40 days of protests. The people behind the demonstrations said they're giving up a little bit of their time for lent in hopes of getting permanent protections for children brought to the country illegally. Faith in the Valley Kern is a network of churches and congragations and you'll see them fighting for DACA recipients outside local congressional offices until Easter Sunday.

Faith in the Valley, a grassroots organization that represents around 120 congregations in the central San Joaquin Valley said the city declined to meet with the group so organizers could get an update on the plan. The organization wants to help and is concerned about tenant education. “We can’t wait for it to begin, we have to let folks know this is coming,” said community organizer Lety Valencia.
This Post Has 0 Comments