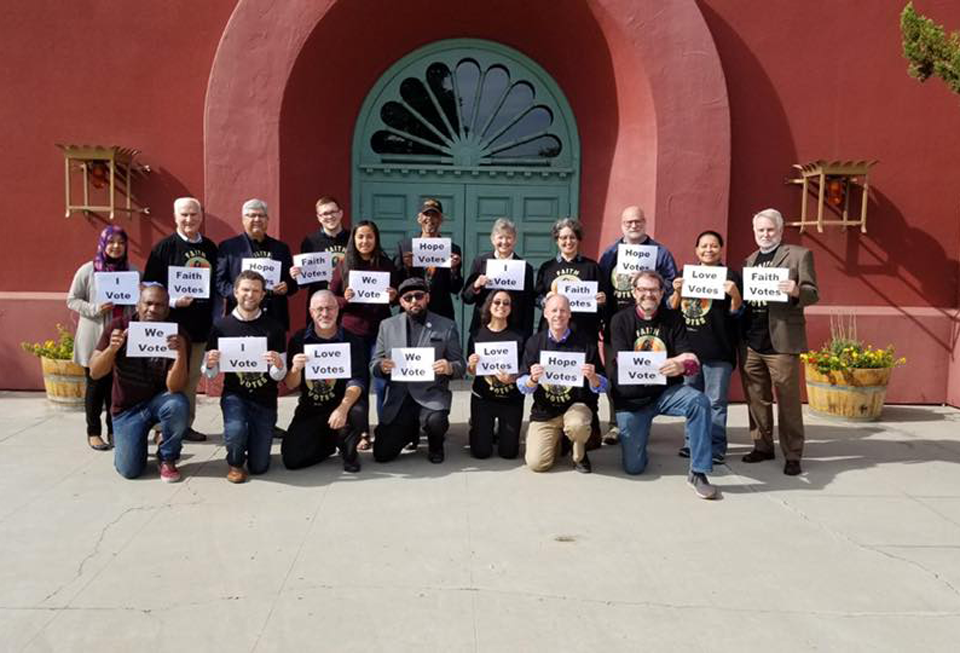 After weeks of over 1,000 volunteer shifts leading to over 18,000 conversations with new and infrequent voters from Kern to San Joaquin Counties, on Election Day we began to see some of the fruits of your labor. While it will take us a few days to run the final numbers, we are confident that your calls, door  knocks, congregation voting commitments, and transformative conversations led to thousands of people voting in the Central Valley on Election Day who, simply put, would not have done so without your encouragement, love and belief in their voice and experience. That alone is a life changer for every one of those individuals. Just as one example: Señor Carillo from Taft voted for the first time, since becoming a US citizen this January. One of our phone bankers contacted Carillo, the day before election, and found out he didn’t know how to vote. Our Faith In The Valley Staff and Leaders met with him on Election Day, explained the propositions, took him to his polling location and he voted!

Your efforts also made a profound impact on the local and state issues that we care about and the elected offices that are responsible for action on those issues. You helped ensure that those most directly impacted voted and were heard on issues including affordable housing, parks for all, funding for our schools, and defending health care.

We are proud to share that, because of all of that, you helped defeat Prop 5, which would have robbed our schools of over $1 billion each year! And while we are disappointed that Proposition 10 did not pass, which would have restored local control for our cities and counties to consider the rent control needed for vulnerable renters, I cannot stress enough how sure I am that the fight to protect Central Valley renters from rising rents, substandard housing, unjust evictions and homelessness has only just begun! In fact, I believe that Prop 10 helped us shine a light for the first time on the specific housing crisis we have right here in the Central Valley. It’s not just the Bay Area and LA. And, it is not too late for our local officials to stand up and act, and we are already seeing some of our cities beginning to explore local policies that protect our most vulnerable renters!

We also have faith that those elected to represent us – whether they be in our cities and counties, Sacramento, or in Congress – will represent our families more righteously than they have in the past. The stories lifted up by the thousands of infrequent voters brought into the election, and our moral agenda for the region, give us the power to hold our elected leaders (whether they be newly-elected or incumbents) accountable to the demands of justice. Through the campaign, we’ve secured commitments from many elected officials – City Council Members, District Attorneys, Congress Members and others – to meet with them before their term starts in January.

We invite you to help shape an agenda to advance our policy priorities with officials over the first 100 days of office. There is much to be hopeful for, as we prepare for 2019. We now begin the work to hold our elected officials accountable and to also ramp up new crucial efforts such as ensuring our communities participate in the 2020 Census for the full funding they deserve and need.

I’ll close with these words of encouragement and clarity from our Board member and clergy leader, Hajj Reza Nekumanesh:

“Yet again, our nation is at a possible turning point. Do we remain on the same course or is there hope on our horizon? Our brothers and sisters have tirelessly canvassed, phone banked, and done everything possible to get out the vote. Regardless of outcomes, we know voting was just one step. Now we need to continue the work by engaging those who have been elected to serve us, keeping them accountable to our people. We remain: One People, One Fight!”

Thank you for your love in action. We need and appreciate you.

Besides More Lives, What Do We Have to Lose? Fresno Should Pony Up for Advance Peace

Aaron Foster is among those trying to provide a second option for Fresno’s most trigger-happy citizens. Its name is Advance Peace, a program for reducing gang-related gun violence that Mayor Lee Brand and the Fresno City Council must find a way to fit into the 2019-20 budget. In fact, I’d argue city leaders can’t afford not to.

Michael Tubbs, the 27-year-old mayor of Stockton, California has a radical plan to combat poverty in his cash-strapped city: a 'no strings' guaranteed basic income for residents.

A Rally for Unity in the Fight Against Bigotry

Toni McNeil was standing in a circle surrounded by dozens of people gathered Friday to condemn white supremacy following the incidents in Charlottesville, Virginia, when a white man tapped her on her right shoulder. As she turned, the man called her over to him. The interaction lasted less than 60 seconds but it made her want to cry. “I want to tell you I’m sorry,” he told her with tears in his eyes and her hand in between his.
This Post Has 0 Comments