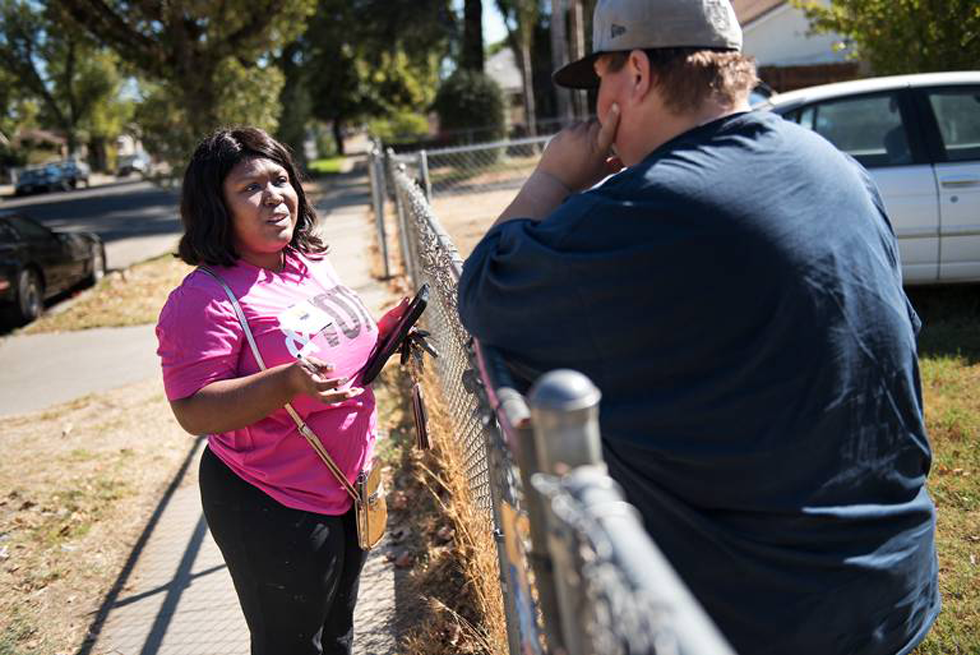 Ambriana Williams knocked on doors Saturday in west Modesto, asking residents what issues concern them the most as the country heads toward a highly contested midterm election.

She was part of a group of local community advocates trying to encourage registered voters to speak up on behalf of their predominantly low-income neighborhood; residents who might feel like their votes don’t count.

“You’re going to feel like you don’t matter if you don’t make your voice heard,” said Williams, who canvassed the neighborhood with her husband AAron Williams.

The neighborhood canvassing was organized by Faith in the Valley, a nonprofit group that offers help to underserved residents in Stanislaus County. The group also has chapters in Merced, San Joaquin, Fresno and Kern counties, advocating on behalf of residents on a variety of issues, including increasing rental rates, sub-standard housing and expanding immigration enforcement.

On Saturday, the group targeted registered voters who hadn’t voted in the last three elections. Those voters in this neighborhood tend to be low-income earners, members of ethnic minorities or millennials, said Andy Levine of Faith in the Valley.

“We believe it’s because they’re never encouraged to vote,” Levine said. “We want to know what are they concerned about?”

In three ZIP codes that encompass the Modesto area, there are about 6,500 registered voters who have not voted in the past three elections, Levine said. The group uses these statistics to find those voters and remind them that there’s an election Nov. 6.

Voters like Tanisha Ryder, who last voted in the November 2016 presidential election. Affordable housing is important issue, because she and her mother are searching for an apartment to rent.

“Any one-bedroom apartment is over $1,000 a month,” Ryder said. “My mother and I both get Social Security, and that’s only $1,700 a month for both of us. How are we going to pay utilities and everything else?”

The Faith in the Valley group was encouraging the voters they encounter to approve Proposition 10, which would allow cities throughout the state to have rent control. The group also was encouraging voters to vote no on Proposition 5, which they say would rob schools and local governments of much-needed tax revenue.

Other than that, the Faith in the Valley group was not choosing sides on other ballot measures or candidates. Levine said its focus is not to tell residents how to vote, but to participate in the election process.

In the face of escalated ICE enforcement, faith communities in Fresno and across the Central Valley rallied support to accompany and defend families threatened with militarized immigration enforcement.

For Nkosi, a double major in sociology and history at UC Santa Cruz allowed him to connect his experiences with his interest in black U.S. history, the Civil Rights Movement, and the contemporary moment. The historical roots of racial, economic, and social inequality illuminate today's injustices—and fuel his desire to make a positive contribution in the world.

Thousands of people in Fresno County are evicted from their homes every year. It’s a misconception that failing to pay rent is the only reason people are evicted, according to a study just released by the organization Faith in the Valley in partnership with Fresno State and Central California Legal Services.
This Post Has 0 Comments