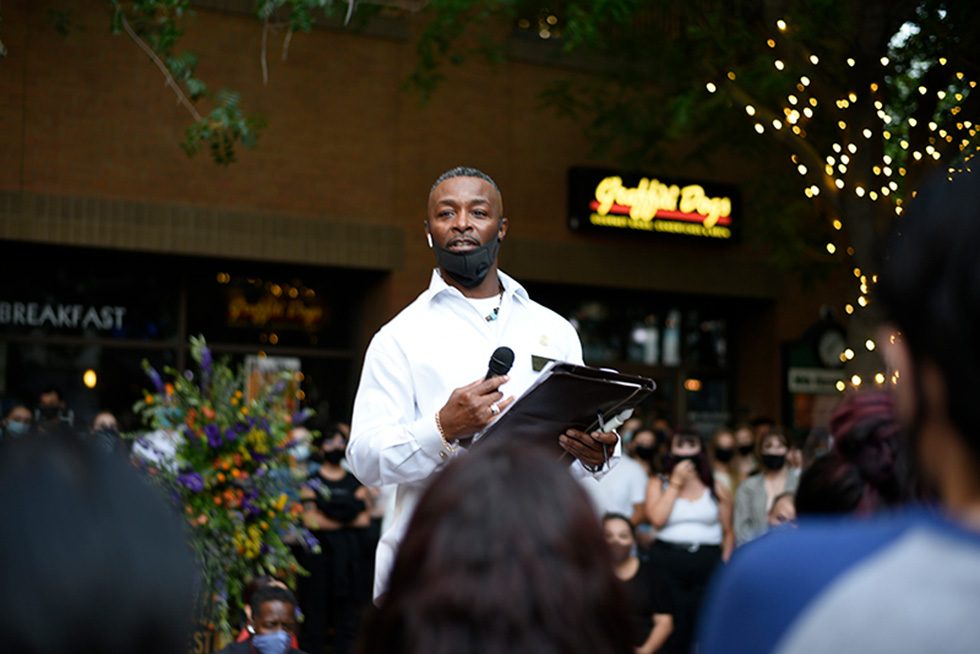 Michael Baldwin is a member of Faith in the Valley’s Board of Directors and resides in Stanislaus County. In 2018, after serving 26 years of a double-life sentence, Michael settled in Modesto to use his life experience to bring healing and understanding to the traumatized and the marginalized, to bring equity to the community, to redefine justice, and to mend broken relationships. He soon started MBS Consultants, founded the nonprofit Legacy Alliance Outreach and became a sought-after community advocate, educator and paralegal.

The murder of George Floyd in 2020 pushed Michael’s leadership to a more urgent and outspoken place. Around that time, he accepted an invitation to join the Faith in the Valley Board to deepen and broaden his work to effect systemic change in Modesto, across the Central Valley, and beyond.

“We, as a society, have to be willing to take some chances on redemption, on restoration. We have to have faith. We have to become a voice for those men and women who remain incarcerated beyond the point of restoration. We also need to spend time with victims. So they get a chance to heal too.”

Michael Baldwin, Faith in the Valley Board Member

We spoke to Michael to learn more about his life’s journey and his call to all of us to take more chances for redemption, restoration, faith and healing.

What does it mean to be you and participate on the Faith in the Valley board?

Michael talked about the role Faith in the Valley played and can play in supporting returning citizens.

I was never a bad guy. I was a hurting guy who was in need of healing. And so now that I’m healed, and healing, I can elicit healing in other people and that is what I do.

How did the healing process begin for you?

Inmates helped me change my life. Richard Mejico was the first person to walk up to me in the prison yard and ask me, “Who hurt you?” He didn’t have to ask me that. But by asking me that powerful question, he changed my life. He introduced me to myself.

In turn, I was able to affect the lives of thousands of men and now I stand on the other side of the fence, waiting to catch them, so that they get to transition and fully restore themselves into society. Because right now, as it stands, the system is broken on the inside. And when they come out, there’s nothing. There’s a vacuum. And if we don’t grab them, society will say, “Well, what happened, didn’t they get rehabilitated in there?” I’m tired of society being tricked into thinking that our justice system is effective and so the people that come out and commit crimes must be horrible people. No. They didn’t get what they needed. And so, those of us who have experienced incarceration and reformed ourselves, we are the last line of defense. And we are grabbing them and we are guiding them and most of them are coming out decent people who just need help.

What do you think it will take to reform our criminal justice system and to help bring true restoration for returning citizens?

When we think about our law enforcement, and how much they have to stare into the darkness in our society, in some ways they can become that. They can become the criminals that they hunt down. And many of our incarcerated individuals, they can change. But if our law enforcement thinks that they are okay, then they don’t change anything. And I see them as victims. And most of our incarcerated individuals are victims of a crime at some point in their life and they act out of that trauma. By bringing those two communities together and letting them see how much they have in common I found that to be very, very beneficial.

Right now, I have a transitional house that is going to be able to house 10 men. As soon as I can start another one I’m going to open up one for women. And we’re going to keep on growing this thing. It’s not for the money. It is for the healing aspect, it’s for restoration. Families being made whole again.

What else did you learn about yourself while you were incarcerated? What sustained you in prison?

I found poetry when I didn’t have anybody else I could talk to. I found myself in a position where everybody came and talked to me but I had nobody I could talk to. And I found poetry because I wanted to scream. I was watching Black men get killed on the street. I was watching us get a Black president and I was stuck in prison. I had destroyed my voice. I didn’t realize that my crimes and my choice to allow myself to behave that way wasn’t just taking me out of society, it was taking my voice away. It was silencing me among my children. It was silencing me.

That was the greater crime that I was committing. Silencing my voice. Silencing God’s ability to use my voice. I felt ashamed for that. That created a guilt in me that made me turn around. I realized that I didn’t have an original thought of my own in my head. Most of my thinking had come from other people. It was trauma-induced. By healing that trauma, by facing that trauma I was able to clear off that path to have a better relationship with God. Today I call him Jesus Christ. I respect other people’s ability and desire to choose their way. My job is to just clear the trash out of their path. Let them create that pathway, let them create that relationship. If you see something in the road, you should move it. And if you can’t move it, then at least warn people about it. And so, that’s my life today.

What do you see on the horizon for the next year or so?

What has happened as the result of a recent law that was passed, is that as soon as you are released on parole, you get the right to vote. The formerly incarcerated are a large voting bloc with tremendous voting power. Where you have the police union, we may be just as large of a population, with just as much voting power. I think when you have an individual who is formerly incarcerated and he involves himself in the political process, it makes him feel like he’s a part of society. By not allowing that individual to feel like he has a voice because he’s a felon, you in fact perpetuate incarceration, you perpetuate that cycle.

One of the things I’m looking into is to take on some of the educational process. Not telling people who to vote for, but educating them about the power of their voice. How to vote, how to become informed about your vote and the people you vote for, how to participate in, not just big elections, but the smaller elections. Our school boards, our councils, our county supervisors, our sheriffs, our D.A.s. Those are some of the most critical elections that we have in our communities. A lot of times when we ask for an audience with them they don’t give it to us because we’ve been ignorant of our power and of our voice.