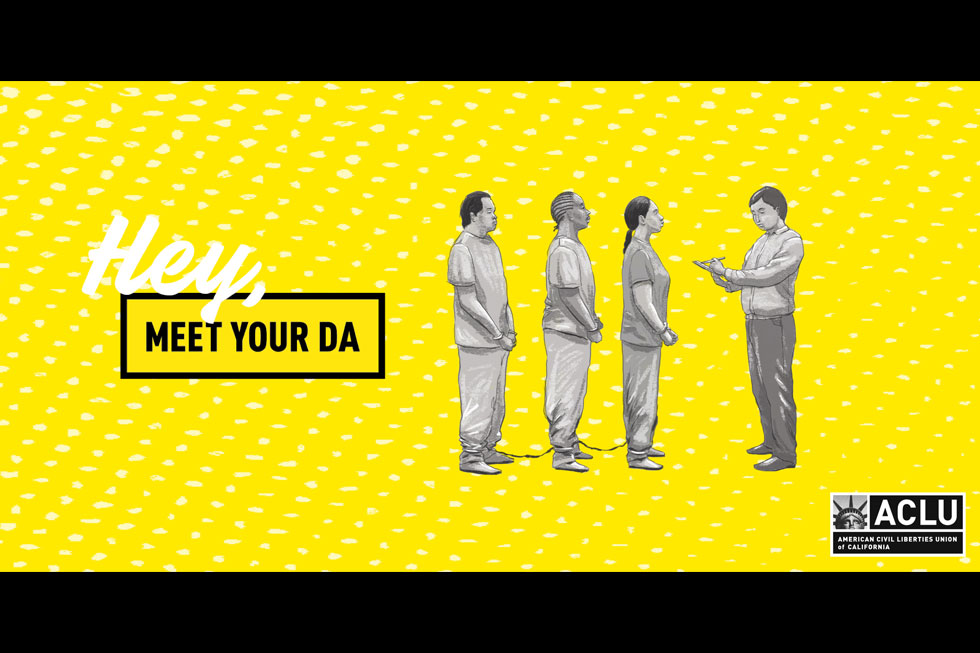 The American Civil Liberties Union of California (ACLU-CA) and local partner organizations today launched Hey, Meet Your DA!, a campaign designed to raise awareness about the powerful role district attorneys (DAs) play in the state’s 58 counties, and to increase accountability and transparency within the offices. The campaign features an interactive website, a report that highlights how out of step many DAs are with voters on criminal justice reform measures, and an animated video narrated by award-winning singer/songwriter and founder of FREEAMERICA, John Legend.

“District attorneys are among the most powerful elected officials in local government,” said Ana Zamora, criminal justice policy director with the ACLU of Northern California. “The decisions they make impact the lives of millions of people, including families and entire communities. Many Californians may not know who their DA is or the role they play in the complicated ecosystem of the criminal justice system. We want to change this dynamic and it starts with introducing them to their locally elected DA.”

Through the campaign site www.MeetYourDA.org, interested groups and voters can quickly find out who their DA is and where they stand on the issues. The site connects Californians to their district attorney with an easy zip code search and other interactive features, including a tool where constituents can email their DA directly, a feature currently not available on any advocacy platform. In addition, the website has a profile on every DA in California and tracks their public positions on four criminal justice ballot measures that have passed since 2012.

“Many DAs aren’t used to voters paying attention to them,” says Zamora. “The Hey DA Campaign in California will change that. With a quick search, Californians can find out all about this very important local official, and send them a quick note to tell the DA how they’re doing. DAs in California should expect to start hearing a lot more from their communities.”

The ACLU-CA is also working in partnership with regional non-profit groups engaged in criminal justice reform efforts in 11 California counties. In Kern and Fresno counties, Faith in the Valley leads the effort while Fathers & Families of San Joaquin take the lead in San Joaquin.

“Faith in the Valley is excited to join the ACLU of CA in this statewide effort to create greater channels of communication between the community and DAs in California to improve the health and well-being of communities that have been most devastated by mass incarceration,” said Pastor Trena Turner, Executive Director of Faith in the Valley.

“District Attorney Verber Salazar, as well as all DAs in California are elected officials and we believe it is important to increase opportunities for dialogue between local decision-makers and their constituents, especially those impacted by systems of incarceration. This starts by educating the community on the powers of the DA and the role of DAs in issues we care about most,” said Sammy Nunez, Executive Director of Fathers & Families of San Joaquin.

John Legend collaborated with the ACLU of CA as part of his #FREEAMERICA campaign to help end mass incarceration. “District attorneys are important players in our fight to end mass incarceration and put a stop to the racial bias that keeps disproportionate numbers of people of color in the criminal justice system,” said Legend. “When we aren’t paying attention, their power goes unchecked. So it’s up to us to hold them accountable, which starts with getting to know them.”

In partnership with Harvard Law School’s Fair Punishment Project, the campaign also released a report, “Meet California’s District Attorneys” that analyzes the public positions DAs from the state’s largest counties have taken on four successful criminal justice ballot measures that passed in the 2012, 2014 and 2016 elections. The report compares these public positions to the final vote in each county, and notes how out of step many of these locally elected leaders are with their constituents.

“Based on our analysis, California’s DAs have opposed reforms aimed at reducing the jail and prison population while their constituents have repeatedly voted in favor of these essential reforms,” said Jessica Brand, Legal Director of the Fair Punishment Project. “We hope this report will enable voters to learn more about the positions of their elected DAs so that they can hold them accountable when they adopt policies that are not in the best interest of the communities they serve.”